An Exclusive Halloween Ogre Just for Us

The leaves are falling, blanketing the parks of Bucharest with their gold and red.  The breezes bring a chill now as the days shorten.

Halloween is in the air, the time of witches, fairy princesses, hobos, Boo Radley, and the Hollywood fantasies of a childhood younger than mine.  It is the gateway holiday that opens the door to the soon to come turkey and then the mistletoe.

Halloween is a favorite transgender holiday, a time when society gives us license to dress to our fancy.  I must admit that I, for one, never took advantage of this license, so deeply was I in the closet and weighed down by the knowledge that a disapproving spouse would not grant me even this one day.  Instead I would accompany my own son as I was, taking joy in his delight, never forgetting the look in his 4-year-old eyes when our kind neighbor-turned-witch put his hands into a bowl of candy.  His joy and the delight of walking him through our neighborhood of wizards, monsters, witches, and princesses were enough. 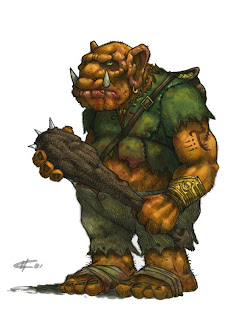 But on Halloween there is also a ogre exclusively for us.  He lurks in the dark, ready to pounce on any person walking the transition path.  It is my pleasure,  friends of all gender persuasions, to introduce you to the transgender exclusion.


Let's get to know him a bit better.  If I refer to him as he, it is because I see him as big, muscular, well-fed, fantastically wealthy, and without an ounce of sympathy for others as he dominates his space.  He is, in fact, a powerful figure in the U.S. health insurance industry, where he flexes his muscle to deny coverage of transition-related care to transgender persons.

Knowing that many of my readers are from outside the US, I will digress for a moment.  You see, in the US almost all people who have health insurance receive it through their employer.  When I worked for Computer Sciences Corporation, my employer paid for most of my insurance and gave me a small pool of plans from which to choose.  Now that I work for the U.S. federal government, I have a wider selection from which to choose in the Federal Employee Health Benefit (FEHB) pool.  The various insurance plans are administered by private, for-profit corporations.  What they cover and do not cover is set in contracts negotiated between employer and provider, the premium payments from the employee set in accordance with these contracts.

The transgender exclusion has a long history.  Going back to the 1970s, if not earlier, almost all insurance plans in the US have contained paragraphs that specifically exclude coverage of anything related to sexual transformation.  This means that insurance coverage of counseling, hormone therapy, and blood tests -- not to mention any and all forms of surgery -- is denied to us.

Over the past decade the situation has begun to improve slightly as a few employers have negotiated contracts that do not contain this exclusion.  These progressive employers recognized that the cost of providing coverage is minimal given the small number of transgender persons who embark upon transition.  Providing coverage makes for a more welcoming, accepting workplace in which transgender employees are affirmed and become, in fact, more productive.

Another landmark was the 2011 ruling by no less than the Internal Revenue Service -- the U.S. federal tax agency -- that transition-related procedures are medically necessary and, therefore, tax deductible.  The World Professional Association for Transgender Health (WPATH) and a growing number of medical associations have called for elimination of the transgender exclusion that discriminates against a small and, until recently, not very vocal minority.

"Has the U.S. Government (USG) joined this group of progressive employers?"  I'm glad you asked.

Over the past decade the USG has made great strides in accepting the transgender members if its diverse workforce.  The 2008 federal district court ruling that discrimination on the basis of gender identity or expression is, in fact, sex discrimination was a landmark without which I might not be writing these notes today.  The U.S. State Department has proclaimed that LGBT rights are human rights, a policy that has become a rallying cry for LGBT people around the world.

So what about health benefits?  Alas, I regret to report that the transgender exclusion is still alive and healthily flexing his muscle in the FEHB plans offered to federal employees.  Sigh.  As equal employment opportunity and workforce diversity policies have progressed, health insurance has remained quaintly in the age of disco. 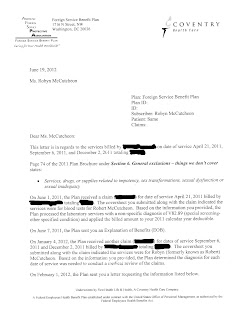 Our Halloween ogre is ready to pounce at any moment.  For me it was Halloween in June when I received a formal letter from the exclusion himself.  I had expected the letter for a year, wondering how long it would take for him to notice me and figure me out.  Given that I have not as of yet gone for any surgical procedures, I have not exactly incurred major expenses that would have drawn immediate notice.  If anything, it must have been my legal name change that stood out like a red flag in the hands of a toreador.  One sight of red and the bull began to paw the earth, preparing to charge. 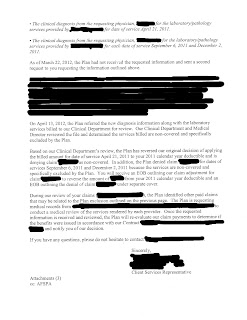 Was I surprised to receive a letter from Mr. Transgender Exclusion himself?  No, not really.  Like most of the U.S. transgender population, I knew my transition would be self-financed.  Like others, I expected to be devastated financially.  In this belief it appears I will not be disappointed.  Thank you, Mr. Exclusion, for acknowledging my existence.  I feel honored.

Am I upset with my employer, the USG?  No, not really.  Things move slowly in any any large organization, and the USG is one of the largest.  If anything,  I am amazed at the rapid expansion of transgender rights for federal employees over the past decade.  The transgender exclusion will go, if not this year, then next year or the year after.  It takes a village, and our village of progressive forces will prevail in the end. 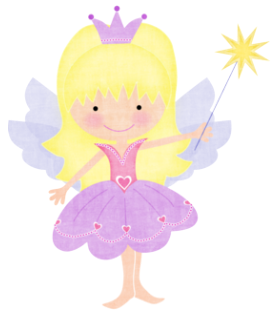 So beware as you make your rounds this Halloween night.  Amidst the witches, hobos, wizards, and zombies, our own exclusive hobgoblin lurks, waiting to pounce.  Someday he will transform into a beautiful fairy prince or princess, ready to grant all wishes.  Of this I am certain.  It hasn't happened quite yet, but like any fairy tale, this one too will have a happy ending.

The autumn rains have come to Bucharest, latitude 44.5-deg N.  It's a lazy Saturday morning.  Oana and I lingered long over our morning coffee and looked out the door to the veranda where cloudy skies and a light rain announced that autumn has come.


A week ago today I took a seven hour bus ride to latitude 47-deg N to spend the long Columbus Day weekend with OD and her partner D.  On Sunday we had a reprise of last May's picnic in the woods on the outskirts of Chisinau.  Moldova's transgender community came out for the day.  The sun shone brightly and warmly.  We all said it was a day на заказ, made-to-order for a summer picnic.  We spent hours enjoying shashlyk prepared by the guys over a wood fire.  The women served up the salad, and a bottle of homemade Moldovan wine was passed around.  Everyone was still worried about documents.  The Office of Registries (загс) is contesting last spring's appellate court decision in favor of granting new documents to transgender people based on hormone therapy.  The matter is now before Moldova's Supreme Court, and no one knows for sure how long it will be before there is a decision.  One of the guys, a big man with muscular arms, is worried that his long-delayed marriage is as distant as ever.  But as we lounged on the grass and soaked in the sun, the worries drifted to the background.  It may have been October, but it was day made-to-order for a July picnic.


The rains came to latitude 47-deg N that night.  By Monday morning the temperature had dropped to breezy +5C as the rains continued.  I traded my summer outfits for slacks and a jacket, and we walked quickly through the streets as we ran our errands for the day.  Once back inside, we spent the afternoon and then the evening watching old Soviet-era comedies, snacking, laughing, and talking about life.  D entertained us with a show of strength by whisking each of us off the ground in turn and throwing us into the air.  Laughter filled the room on this made-to-order autumn day that had come so quickly on the heels of summer.

Back in Bucharest, it was time for the winter wardrobe.  When I went to an official meeting in downtown Bucharest on Wednesday, it was in a woolen skirt suit that I last wore in March.  I now wear tights and a jacket on my bicycle commutes, returning to that amorphous, gender-less blob that we bicycle commuters become in the colder weather.

On Friday I had the misfortune of eating something in the morning that must have been spoiled.  I have had food poisoning enough times to recognize the symptoms quickly.  In Uzbekistan, if one did not come down with Tashkent tummy at least two or three times in the first year, something was wrong.  I made it through the day but didn't venture far from the rest rooms.  In the evening Oana put me on the couch and kept the tea, lemon, broth, and honey coming until, slowly, my intestinal track returned to normal.


Oana headed out this morning after our slow breakfast.  Although it was not planned that way, Oana has become my adopted daughter, in the emotional if not in the legal sense.  In State-Department-speak, she is now my member of household as she has taken up residence in my guest bedroom and has taken over almost all cleaning and housekeeping duties.  Dinner is on the table when I get home in the evening, and the coffee or tea are ready when I wake in the morning.  I do the fancier cooking on the weekend.  I look at Oana and remember myself at her age.  As long as I am in Romania I can give her refuge and time to get on her own feet.  I wish I could do more, but at least I can give her the gift of time.


Oana won't be back until tomorrow.  Lingering over my tea, I opened the Lincoln News and read about what has been happening in and around my U.S. home town of Burlington, Maine, latitude 45.2-deg N.  It's a clear, cold night in Maine as I write these notes, but it is supposed to rain later today.  A new bridge opened in Howland last week, and the town came out in force to celebrate the new span across the Penobscot.  According to the Lincoln News, it was a chilly but memorable day.

Autumn has come to latitude 45-deg N.  In my old life this was the season when I would listen to Joni Mitchel's Urge for Going, feeling an immediate connection with that urge.  Now my urge is quite different.  It's an Urge for Staying, for holding on and making every day count.  There is joy in pulling out the autumn clothes, listening to Oana's latest joys and sorrows, and watching the rain and the changing of the leaves.  The autumn in Bucharest is golden and happy.  May the same be true for you wherever this autumn may find you.

No longer do I feel a sadness when I hear Joni Mitchel sing Urge for Going, but it is a beautiful song nonetheless.