Voice.  It's one of the acid tests for anyone walking the male to female transition path.

Does anyone of my generation remember how they sounded before puberty?  I may be one of the fortunate few who does.  Here's a sample:


Yes, that's me in the cub scout uniform, and that's how I sounded in 1965.  In those years we had a reel-to-reel tape recorder that we would turn on during family events.  Those tapes are lost now, but before they disappeared, I extracted a few of the sounds to make a CD as a Christmas present for my Mom and my sisters in 2001.

After male puberty kicked in in the late 1960s, I thought I was doomed.  My voice dropped from alto to somewhere between baritone and bass.  When I made my first abortive attempt to come out as transgender in college in the 1970s, it was my voice that kept me in the shadows, away from other people.  I was already self-conscious enough as it was about my looks, but more than anything else I feared what would happen if I had to open my mouth and speak to another human being.  Here's a sample of my 2001 voice from the same Christmas CD:

Doomed.  There was no way anyone would take this as a female voice no matter what I did.  My voice had dropped in pitch, and there was no way to raise it back.  As I read the literature in my abortive attempts at coming out in 1990 and in 2000-02, I came to understand that hormone replacement therapy does nothing to raise pitch.   Some resorted to surgery, but the results were poor to mixed at best.  The vocal folds, once thickened by testosterone, are not thinned by estrogen.  I came to envy those walking the transgender path in the other direction.  Regular treatment with testosterone will lower even a soprano to normal male range.

Hopeless.  That's how I felt about my voice when I began my fourth attempt at transition in 2010.  I found some websites with advice and practice lessons, but on my own I might as well have been learning to play the violin by reading a book.  The best I could come up with was a falsetto that Kyna graciously tolerated until my friend Shannon and her friend Caroline gently disabused me of it over a year ago.  It was Caroline who first told me the importance of resonance, although in Romania there was little I could do with this knowledge.

When I was in the US in May, 2011, I made me way to Tish Moody,  a speech therapist in private practice who has worked in the transgender voice program at George Washington University.  It was a start, but it was only two sessions.  I had hoped I might be able to work with Tish by Skype once back in Bucharest, but it never worked out.

Finally, late last year I made my way to Linda Siegfriedt, a speech therapist who is also from the GW transgender voice program.  We began working by Skype in early January.  I felt I was back in a cross between learning a language and learning to play a musical instrument.  Exercises, exercises, and more exercises.  Resonance, breathing, pitch glides, strengthening and balancing, functional expressions, and intonation.  It was slow going and frustrating at first, but then. . . .

Perhaps a month and a half ago I began to notice that no one was saying "Sir" to me on phone calls to customer service desks in the US.  It was "Ma'am" from the get go, whether or not I had given my name.

Then on one fine Monday morning in March, the G-Man walked into our office, stopped, and looked at me closely.

I had a dream about you last night, and I realized something.  I no longer have any memory of you as a man.  I have a dim memory of seeing you on the stairs the day I arrived over a year ago, but I can no longer picture you.  I don't even remember what you sounded like.

The G-Man asked if I could still speak in my old voice, but I already knew that I couldn't even if my life depended on it.  It's gone, pure and simple, just as I once thought my childhood alto was gone forever.

The G-Man then asked if I had any recordings of my old voice, and that's when I remembered the Christmas CD that I hadn't listened to in years.  The G-Man's jaw dropped when I played it to him.  "Was that what you sounded like when I met you?"  He was incredulous.  Then a co-worker walked in, and the G-Man asked him if he could guess whose voice this was on the CD.  He couldn't.

A voice changes slowly through hard, persistent work.  While I was sick with no voice at all in late March, I went back and listened to the practice recordings I had made at the beginning of January.  I hadn't sensed it from day to day, but the comparison between the first and last recordings was striking.  Where I had once felt hopeless and doomed, I now hear a voice that is acceptably female.  This is still a work in progress, but OK, well, you be the judge:

Linda tells me I am one of the lucky ones who seems to have grasped and applied the concepts quickly.  She even asks me what I think accounts for such quick progress.  The only answer I can come up with is the study of foreign languages.  Russian is very different from English, and I've spent thirty years making my tongue and mouth do things they never do in English.  I also speak some Portuguese and Uzbek.  Could it be that learning to speak in a female voice draws on those same parts of the brain that both madden and gladden us as we struggle to learn foreign languages?

Still, hearing the G-Man's compliment was one thing.  The same applies to hearing "Ma'am" during blind phone calls and to the reactions of sales people in the stores of Bucharest.  What would a group who knows nothing about my past think about me after hearing my voice not for a minute but for an hour or two?

My acid test came a week ago Friday.  I went to a Romanian high school as part of the Embassy's Meet America program.  What did I talk about?  No, it wasn't about LGBT issues or even about American diplomacy.  I spoke about what it is like to be a bicycling diplomat! 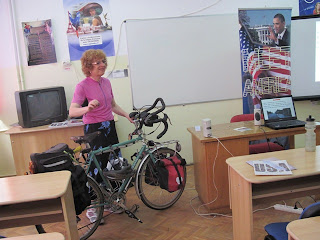 I rode my bike to the school, dressed in a nice new skort and a lavender summer jersey.  The director came out to greet me and introduced me to the English teacher whose class I would be visiting.  Then we went to the classroom, a nice young man carrying my bicycle up to the second floor.

There they sat.  First there were about ten, and then more came in.  In the end there were 20 or so of the most discerning, critical, and quick to speak their minds individuals on the face of the earth:  high school students.  If ever there was to be an acid test, here it was.  We put up a poster of President Obama, and I handed the CD containing my talk to one of the young men who loaded it onto a laptop.

I was nervous that my voice would not carry.  Even if it did, would it last?  I had been sick only a week earlier, and I was still going off into coughing fits.  I started by asking if everyone could hear me in the back of the room.  "Yes," was the answer, "We hear you."

"Who here rides a bicycle?" I asked.  I like to get as much audience involvement as I can when I speak to groups, and this class of Romanian students jumped right in.  Hands went up, and I started calling on the young women and men.  For over an hour we talked about bicycles, bicycle safety, and how a small committed group of activists can band together to change bad laws.

When I was done with the talk, I opened up the conversation.  "Ask me anything you want.  Ask about America, what it's like to work in an Embassy, or about my own life." 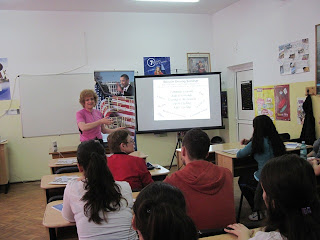 I got the usual good questions.

"As an American, what do you think we need to do to improve life in Romania?"

"What do you like most about living in Romania?"

"What do you miss most from home?"

"Being a woman, what was it like to work in the space program?"

"Well, one of the nicest things about working with NASA was that there were so many women engineers, programmers, and scientists."

I told them about my friend Marilyn, now at Marshall Space Flight Center in Huntsville, AL.  Marilyn was part of the Messenger mission to Mercury last year and is one of the best engineers I know.  When I took over the Mission Scheduling system for Hubble in 1995, it was Marilyn who handed it to me before moving to Huntsville.  Then there were Deborah and Mahin and Kelli and Mary, an excellent engineer and the best manager I have ever worked with.

"Any other questions?" I asked.  A young woman raised her hand.

"As a mother, can you tell us something about domestic violence and how domestic disputes are handled in the US?"

Wow.  I knew for sure at that moment that no one had guessed even in the slightest about my past, and in answer I recounted the experience of a friend who had taken herself and her children to a battered woman's home to get away from an abusive husband.

Then there were handshakes and photos before I headed on my way.  Almost two hours with high school students, perhaps the most critical, discerning class of people on the planet, and here they were asking me about domestic violence and what it was like to work as a woman engineer.

I rode home that sunny day with the biggest of smiles.  My voice had survived two hours of public speaking to a group of teenagers, an acid test if ever there was one.  As I rode the streets of Bucharest, I heard first one appreciative whistle and then another for this middle aged woman in a summer jersey and a skort, but nothing could compare with my two hours in a high school classroom.  My voice has arrived.


*********************
Working with Linda Siegfriedt has been so much fun that I find it hard to think of her just as a voice specialist and myself as her client.  Although we have seen each other only as video images over Skype, I think of her as a friend who visits me each Saturday afternoon.  I think you will find the same.

Speaking of which, here is how you can reach her --

Just tell her that RM from Bucharest says "Hi!"

New Leaf Center for Self Expression