Turning to the East

The next time I board an early morning plane at Bucharest's Otopeni Airport, my ultimate destination will be to the east.  Skirting the Caspian and Aral Seas, I will fly over Kazakhstan and Uzbekistan, the country where I had already begun walking a path towards transition in 2008-10 without quite knowing it yet.  (See I Wish I Was in the Land of Cotton.) Tashkent,  my home for two years, will pass below.  Perhaps I will see the Charvak Reservoir to the east of Tashkent, the scene of so many weekend trips with friends and especially with F1 and F2 to escape the burning Central Asian summer heat.  Then we will cross into Kyrgyzstan as the mountains rise higher and higher.  Soon we will fly over the highest mountains of all, the Himalayas, as we hurry on ever eastward. 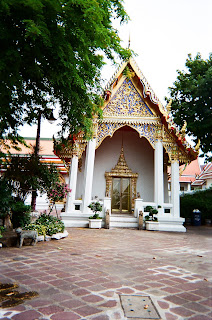 The final destination is Thailand.  If the route is familiar to me, it is because it won't be my first visit.  In 2008, still fresh to the U.S. Embassy in Uzbekistan, I boarded a plane in Tashkent and flew to Bangkok for a regional conference on economic issues.  It was a week of seminar talks, small group sessions, and evening dinners.  I had two suits tailor made.  I walked the city by night and on the weekend, my first time ever in an Eastern country and culture that is so different from my own.  I was enthralled.

I was also sad.  I had known for years if not decades that Thailand had become a mecca for those seeking gender confirmation surgery (GCS).  It was a bittersweet thought that here I was in that mecca but that GCS was further removed from my reality than ever.  I had contemplated transition three times in my life and each time had failed.  A fourth time there would not be.  Impossible.

But as readers of these notes have learned, the fourth time did come.  Against all odds, I succeeded just as I thought I had lost everything.  I am now approaching the one year anniversary of my transition to living full time as a woman, and with that anniversary behind me, I will fly to Thailand not for an economic conference but for the GCS that seemed out of reach only four years ago.

In July I wrote about my decision making on which surgeon I would choose for GCS (Looking for Spa Therapy) and advertised that I would make my choice by mid-August.  A few dedicated readers may have been wondering all through September, "Well, what did you decide?"

Indeed, I have my destination for GCS, my spa therapy, and it is with Dr. Sanguan Kunaporn at the Phuket Plastic Surgery Center in Phuket, Thailand.  It was a difficult choice to make, as all five of the surgeons I was considering are leaders in this field.  I had good rapport with all the clinics on my list, and  I particularly enjoyed meeting Kathy Rumer in Philadelphia in early August.  I had a delightful correspondence with a staff member at Dr. Suporn's clinic who had once herself lived in Bucharest.

So why Dr. Kunaporn?  First of all it was his willingness to correspond with me directly by e-mail without going through his office.  Then there was a referral from an independent surgeon who spoke highly of Dr. Kunaporn and the many testimonials on the Internet from others who had been to him for GCS.  As I sat speaking with Kathy Rumer in Philadelphia, the word came to me that crystalized why I would head east:  Nadine.

I have heard from many people how important it is to have a close friend in attendance during GCS, someone to help you through the recovery period.  At first I saw this as a reason to go to the US for surgery, where Philadelphia is not that far away from my two sisters in Maryland.  Another transgender friend cautioned me, however, that no matter how supportive one's family members might be -- and mine are very supportive -- they will have conflicted feelings.  Far better, she said, to go with a friend who knows me only as I am today and who may herself be walking the same road.  For me that person is Nadine.

The even better news is that between donations, Nadine's savings, and my own funds, we will have enough for us both to have GCS.  Our surgeries will be two days apart in late January, and then we will help each other through recovery.  Depending on my physical condition after surgery, I may also have some limited facial feminization surgery (FFS) about two weeks after GCS.  Overall I expect we will be in Phuket for 5-6 weeks.

Almost four months remain before Nadine and I fly to Thailand.  There is much to do, much to prepare between now and then, yet time is moving forward inexorably.  Tomorrow the calendar turns another page to the first full month of autumn.  A crispness has entered the morning air, and already I need to turn on my bicycle lights for part of my morning and evening commutes to and from Embassy Bucharest.  Before long the leaves will be changing color as thoughts turn towards the holidays, and then there will be the first snowflakes of winter.  As those snows come, Nadine and I will pack our bags and fly eastward over Tashkent and the Himalayas to fulfill the dream that has been with both of us since earliest age.  Only this time it will not be a dream.

Although our funds are nearing what we need for both Nadine and I to have GCS with Dr. Kunaporn in Phuket, they are not quite there yet.  Please consider making even the smallest donation to the fund I have established to pay for Nadine's GCS.  You can find a PayPal link at Nadine Chilianu GCS Appeal.