It is evening in Phuket after one of the most restful, relaxing days that either OD or I has had in many months.  If the view of the water and the sound of the surf are not enough to melt away the tension in even the most tightly wound person, I don't know what is.

After a late breakfast, we climbed down the path leading from the Aspasia Resort to the water.  This is Kata Beach, one of Phuket's three main beach towns, but everything about it is quiet and peaceful.  For anyone familiar with the Delmarva Peninsula in the US, let's say this is Bethany Beach, not Ocean City.


I had not been to the beach since 2005, and OD had not been since 2001.  We both melted away in the warm (not hot!) glow of the sun as we walked in the sand.  Then we took turns in the water.  Kata Beach is more of a bay than a beach that bears the full brunt of an ocean.  The waves are small, and the water is the temperature of a cool but refreshing bath.  One can walk a far distance from shore before the water is over one's head, and even there the water is such a clear azure blue that one can see one's feet on the bottom.  After one turn in the water, we each took another.  It was only the thought that we had forgotten to bring sun block cream with us that drove us back into the shade.  Even so, we both have pink shoulders as a souvenir of our hour in the sun. 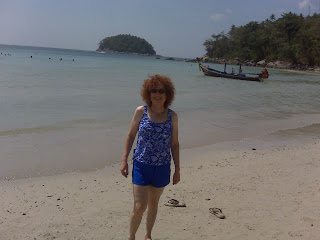 I spent the rest of the afternoon on the balcony, reading, looking at the water, and dreamily floating in a state of holiday rest.  OD, hard worker that she is, had brought translation work with her and used much of the afternoon for that.  Then it was a short walk into town for dinner at a small Thai restaurant with wonderful seafood.  While there, we came to realize that one of our waitresses is herself transgender.  It was not her face that gave her away but her voice.  We wondered aloud and not for the first time why it is that many transgender women are content to leave their voices as they were when in fact it is entirely possible to retrain even a low, monotone male voice into something that approaches being acceptably female.  (See Voice:  The Acid Test.)

It is now 9pm.  Tomorrow we travel to Phuket for our consultation with Dr. Kunaporn.  Our day at the beach is coming to its end, but before it does, I plan on sitting again on the balcony, listening to the surf, and simply melting away into the night.

Follow these links for more of The Exclamation Point::